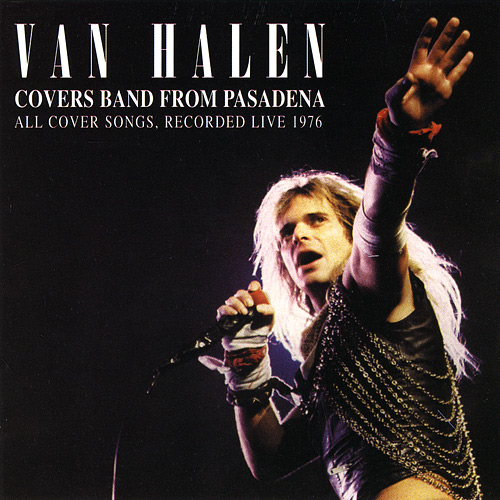 The front cover is a picture of Dave (1984 era).
The inside front cover is a picture of Eddie playing White/Black stripped guitar in black leather pants.
The back cover is a picture of all 4 in a dressing room (obviously after a show 1979 era) w/a purple band at the top that say's "Recorded Live At Aeros Bogarts, San Bernadino, California 1976". The rest of the back cover has a black background w/ the picture as described above w/ track listings below.
The inside back cover (under the CD) is a picture of Dave, Mike and Ed on stage (1982 era).
The disc itself is Silver/Black w/"Halen Bros" on the silver side in red ink and "Ready Go" in silver ink on the black side.
THIS SHOW IS DIGITALLY RE-MASTERED !!!
Since the initial recording was done on a recorder that the batteries were getting weaker as the show went on; each song was digitally speed corrected and then the whole show put back together. No tape hiss, everything is eq'd.
The recording is a pretty good audience recording from that era. You can hear people talking at times, but mostly in between the songs. A couple pieces sounded like it needed to be spliced together but overall an excellent recording from that time.
Track 3 is not an "intro". It's just Ed & Mike fiddling around with their instruments while the others get ready.