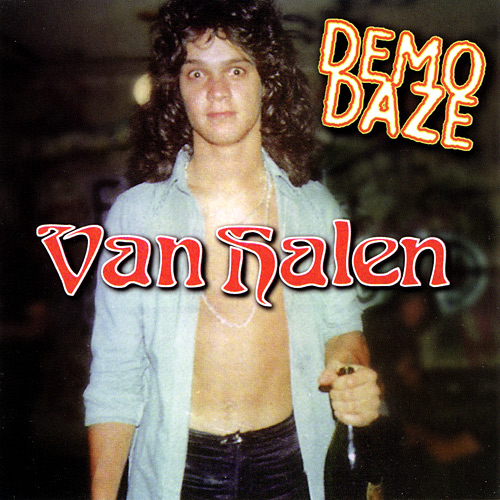 Tracks 1 through 4 are from January of 1976.
Tracks 6 through 8 come from the "On Fire In Fresno" CD.
Tracks 9 through 11 have Mark Stone on Bass and are from 1974.
Tracks 12 through 18 are from 1976.
VooDoo Queen is misspelled twice on the back cover as "Vodoo Queen", but is spelled correctly in the liner notes.
Called "Van Halen Studio Demos" on test pressings and came with plain, typed inserts instead of the full color ones in this release.
The front cover shows a very young Eddie holding a bottle of (champagne) with an open shirt (circa 1975)? Cover says "Demo Daze" in the right hand upper corner with "Van Halen" in red letters in the center. Inside front cover opens up with another picture of Ed in black satin wearing sunglasses upside down and tounge sticking out. Below this is a picture (circa 1979) of the band in the studio. Turning the cover over exposes detailed liner notes with a picture of Michael in the background.
The back cover has a picture od Dave (circa 1976) leaning against a wall with the words "Van Halen" above his head and the track listings to the right of that.
The disc is dark blue with "74-76 D" on the bottom of the disc.
Most of this disc is soundboard but there are a couple of tracks that are audience. Sound is at least comparible to "'77 + Live" disc.