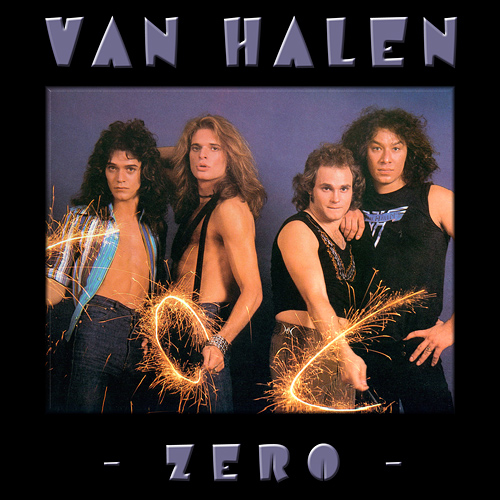 AMAZING sound quality!
Many people have heard the two tracks from this demo, "House Of Pain" and "Runnin' With the Devil", and have commented that the tone is very different than the WB demos and eventual pressed versions. This is extremely evident throughout this set of demos. Eddie's guitar tone is far from what it was to become and there are several instances of multiple guitar overdubs. In some cases, there are as many as three guitar tracks at one time and some solos are actually laid over one another at times.
Dave's vocal delivery is dramatically different on many tracks such as "Babe, Don't Leave Me Alone" and "Somebody Get Me a Doctor".
The art work is lackluster at best, taken from the van-halen.com website photo files and squeezed into a template (see images).
The front cover art is the Flyin' Eddie shot taken from the van-halen.com site from the 1981 Stones gig.
The back is a shot of Eddie circa 1986, sitting on the drum riser finishing his guitar solo.
The inner cover art (if you want to call it that) is a shot of Alex behind the kit circa 1988.
The disc artwork is a shot of Dave from the California Girls video (black and yellow overalls) with a babe at his side, but the ink is smudged and smeared. The disc is printed with a low-cost CD-R printer.
"Runnin' With the Devil" is slightly different that the version that normally follows "House of Pain" on the other boots. This version starts with the band singing the chorus in the fourth measure of the song, before any of the verses are sang.
There are a few very slight, almost unnoticeable drop-outs in a couple spots of the disc. Also, there are two strange skips in "Let's Get Rockin'" where about three seconds of a phrase is back tracked and repeated.
Track 3 is listed as, "House In Pain", on the artwork.
Track 6 is listed as, "Lady Loose", on the artwork.
Dave noticeably sings Track 7 as "Big Troubles".
Track 9 is listed as, "Baby Don't Leave Me Alone", on the artwork.
All in all, 4.99 out of 5! A recording that puts the WB Demos on "Looney Tunes" and "Blueprint" boots to SHAME! Even the "masterered" tracks on "Looney Tunes" don't have the crisp, clear sound that these tracks have.
In May 2002 the errors on this disc were corrected by a member of the Van Halen trading community. Also at that time new artwork was created for it. You can see the new front and back artwork.